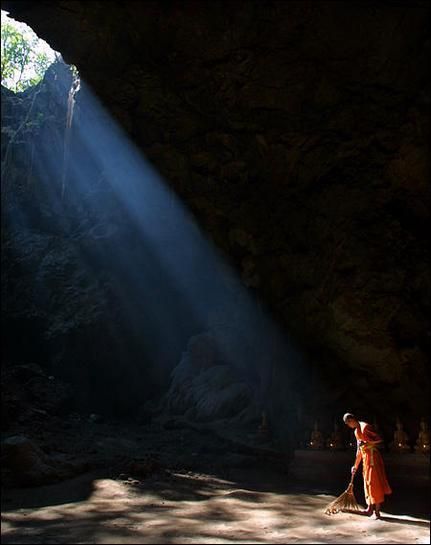 SEVERAL CENTURIES AGO, seven monks were in a cave in a jungle somewhere in Asia, meditating on the type of unconditional love I described in the previous story. There was the head monk, his brother, and his best friend. The fourth was the head monk’s enemy: they just could not get along. The fifth monk in the group was a very old monk, so advanced in years that he was expected to die at any time. The sixth monk was sick—so ill in fact that he too could die at any time. And the last monk, the seventh, was the useless monk. He always snored when he was supposed to be meditating; he couldn’t remember his chanting, and if he did he would chant off-key He couldn’t even keep his robes on properly. But the others tolerated him and thanked him for teaching them patience.

One day a gang of bandits discovered the cave. It was so remote, so well hidden, that they wanted to take it over as their own base, so they decided to kill all the monks. The head monk, fortunately, was a very persuasive speaker. He managed—don’t ask me how— to persuade the gang of bandits to let all the monks go, except one, who would be killed as a warning to the other monks not to let anyone know the location of the cave. That was the best deal the head monk could wrangle from the bandits.

The head monk was left alone for a few minutes to make the awful decision of who should be sacrificed so that the others could go free.

When I tell this story in public, I pause here to ask my audience, ‘‘Well, who do you think the head monk chose?” Such questions stop some of my audience from going to sleep during my talk, and it wakes up the others who are already asleep. I remind them that there was the head monk, the brother, the best friend, the enemy, the old monk and the sick monk (both close to death), and the useless monk. Who do you think he chose?

Some then suggest the enemy. “No,” I say.
“His brother?”
“Wrong.”
The useless monk always gets a mention—how uncharitable we are! Once I have had my bit of fun, I reveal the answer: the head monk was unable to choose.

The door of the head monk’s heart was wide open to all, with unconditional, non-discriminating, free-flowing love. And most poignantly, his love for others was equal to his love for himself. The door of his heart was open to himself as well. That’s why he couldn’t choose between himself and others.

I remind the Judeo-Christians in my audience that their books say to “love thy neighbor as thyself.” Not more than yourself and not less than yourself, but equal to yourself. It means to regard others as one would regard oneself, and oneself as one regards others.

Why is it that most in my audience thought that the head monk would choose himself to die? Why is it, in our culture, that we are always sacrificing ourselves for others and this is held to be good? Why is it that we are more demanding, more critical, and more punishing of ourselves than of anyone else? It is for one and the same reason: we have not yet learned how to love ourselves.

That’s what I mean by loving ourselves: it’s called forgiveness. It is stepping free from the prison of guilt; it is being at peace with oneself. And if you do find the courage to say those words to yourself, honesty, in the privacy of your inner world, then you will rise up to meet sublime love. One day, we all have to say to ourselves those words, or ones similar, with honesty, without playing games. When we do, it is as if a part of ourselves that had been rejected, living outside in the cold for so long, has now come home. We feel unified, whole, and free to be happy. Only when we love ourselves in such a way can we know what it means to really love another, no more and no less.

And please remember you do not have to be perfect, without fault, to give yourself such love. If you wait for perfection, it never arrives. We must open the door of our heart to ourselves, whatever we have done. Once inside, then we are perfect.

Opening the Door of Your Heart” (excerpt from) WHO ORDERED THE TRUCKLOAD OF DUNG?
by Ajahn Brahm